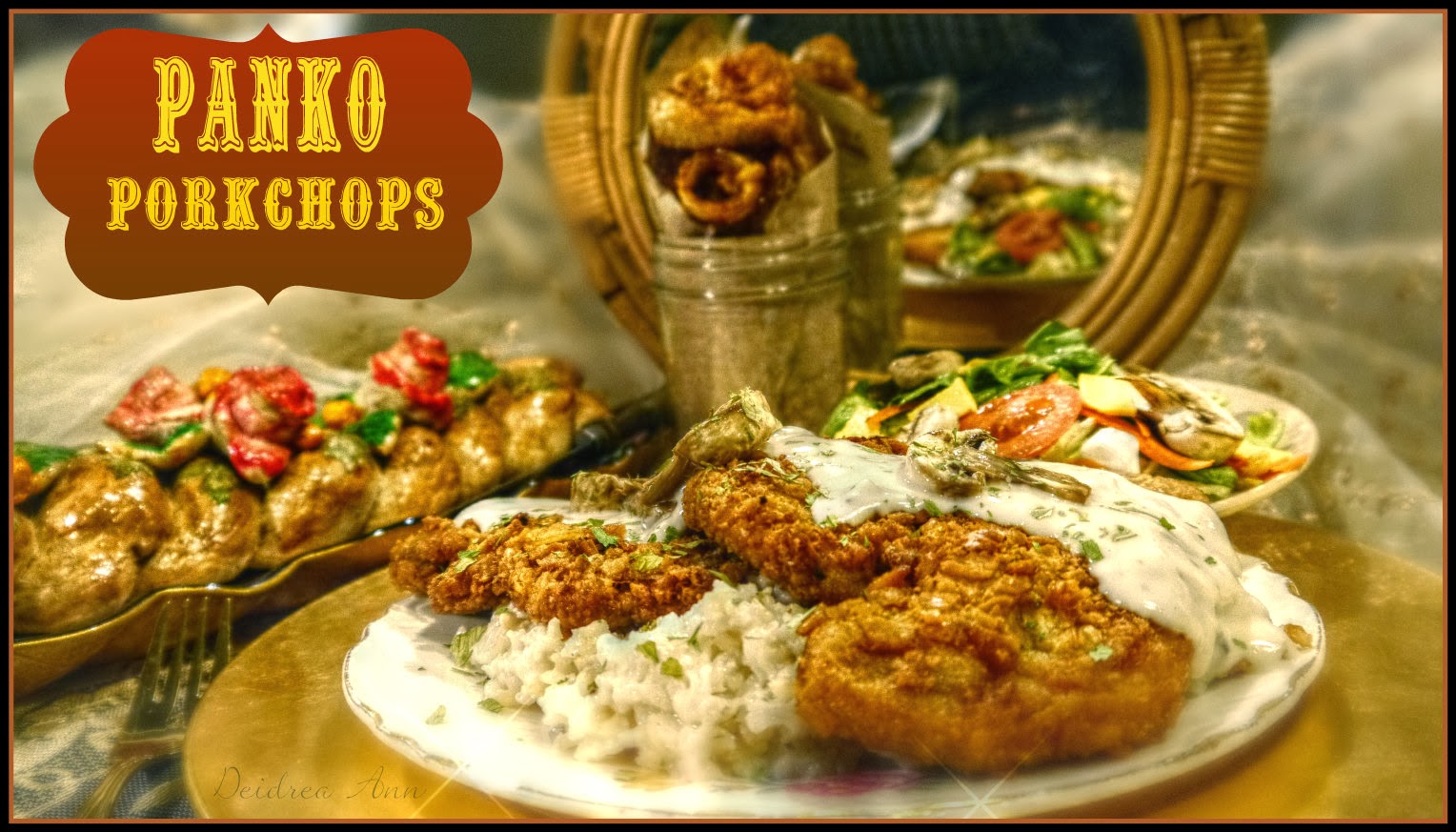 
2 cups of  Panko or cracker crumbs


1 tablespoon Worcestershire sauce
(add to a small kettle, stir constantly and bring to a boil.Boil 1 minute til thick, remove from heat.)


Salt and pepper the pork chops. Coat pork chops in flour . Dip in the beaten egg mixture. Coat with Panko or cracker crumbs. Let them set for about 5 minutes and the coating will set very well.

When the oil is hot, place pork chops into the pan, and fry for about 3 minutes .Flip the chops, and fry another  minutes until a delighful  crispy golden brown. Drain on paper towels before plating. 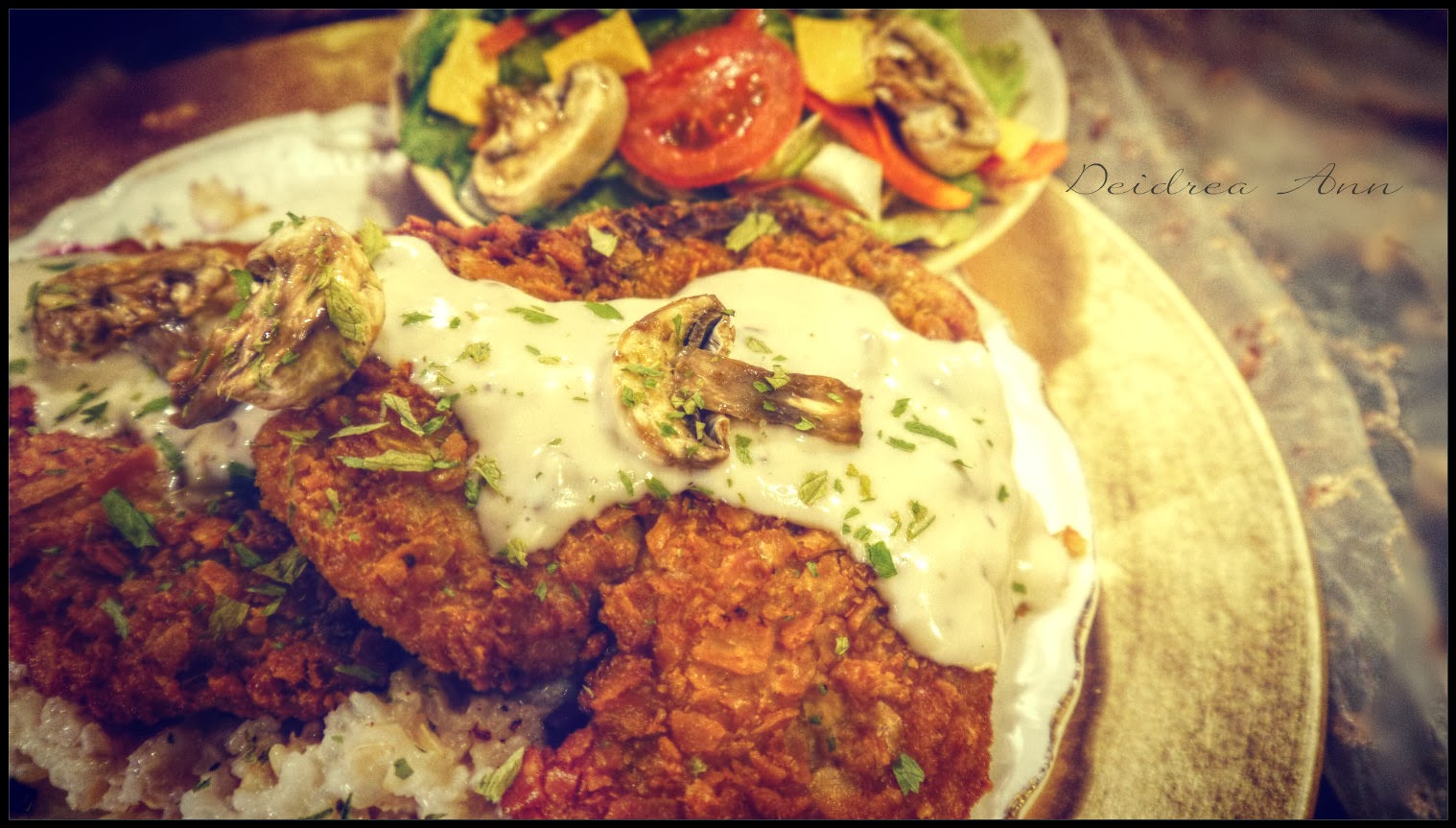 I made onion rings, salad and Artisan bread with mine..it's all a preference. 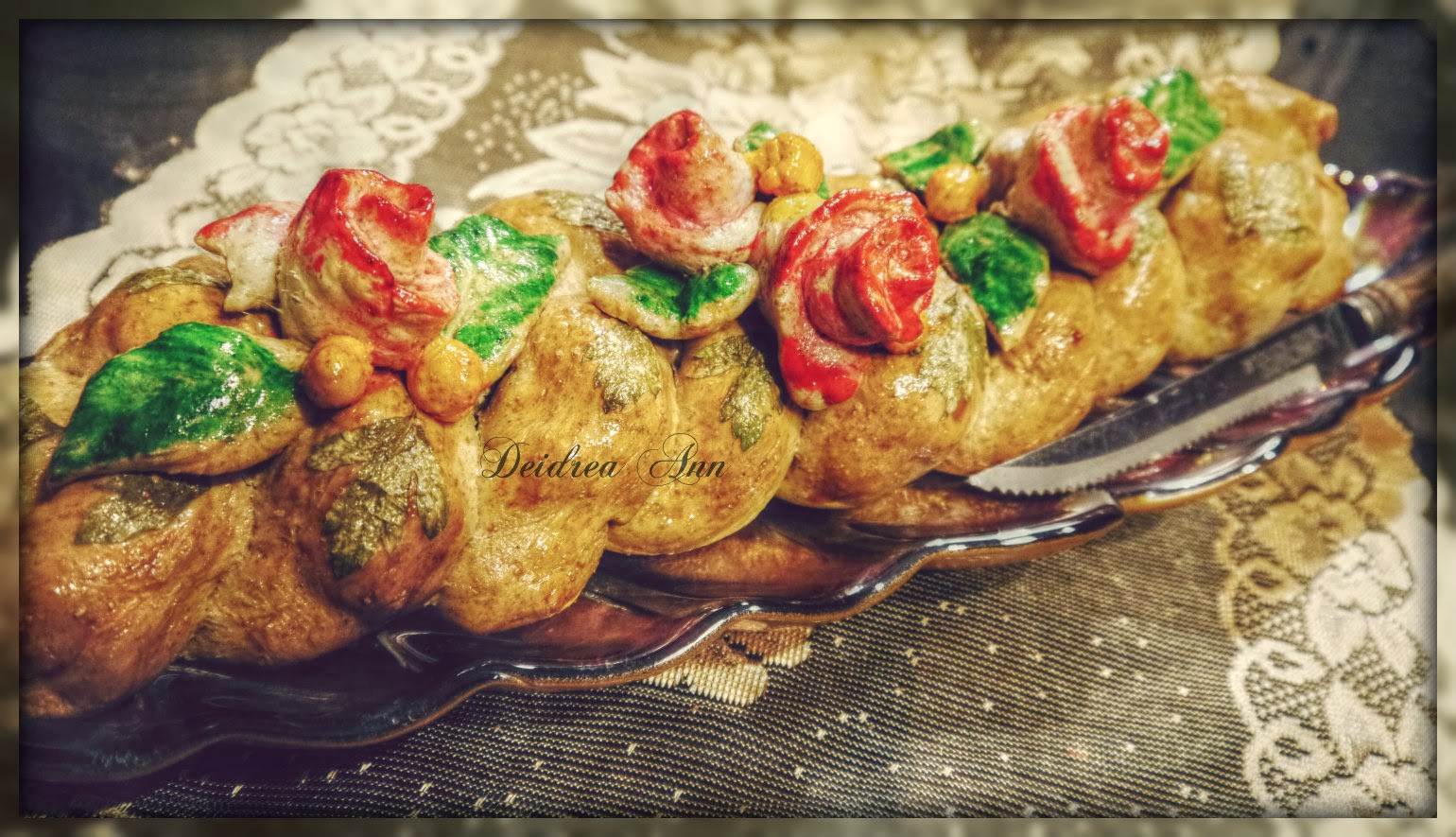 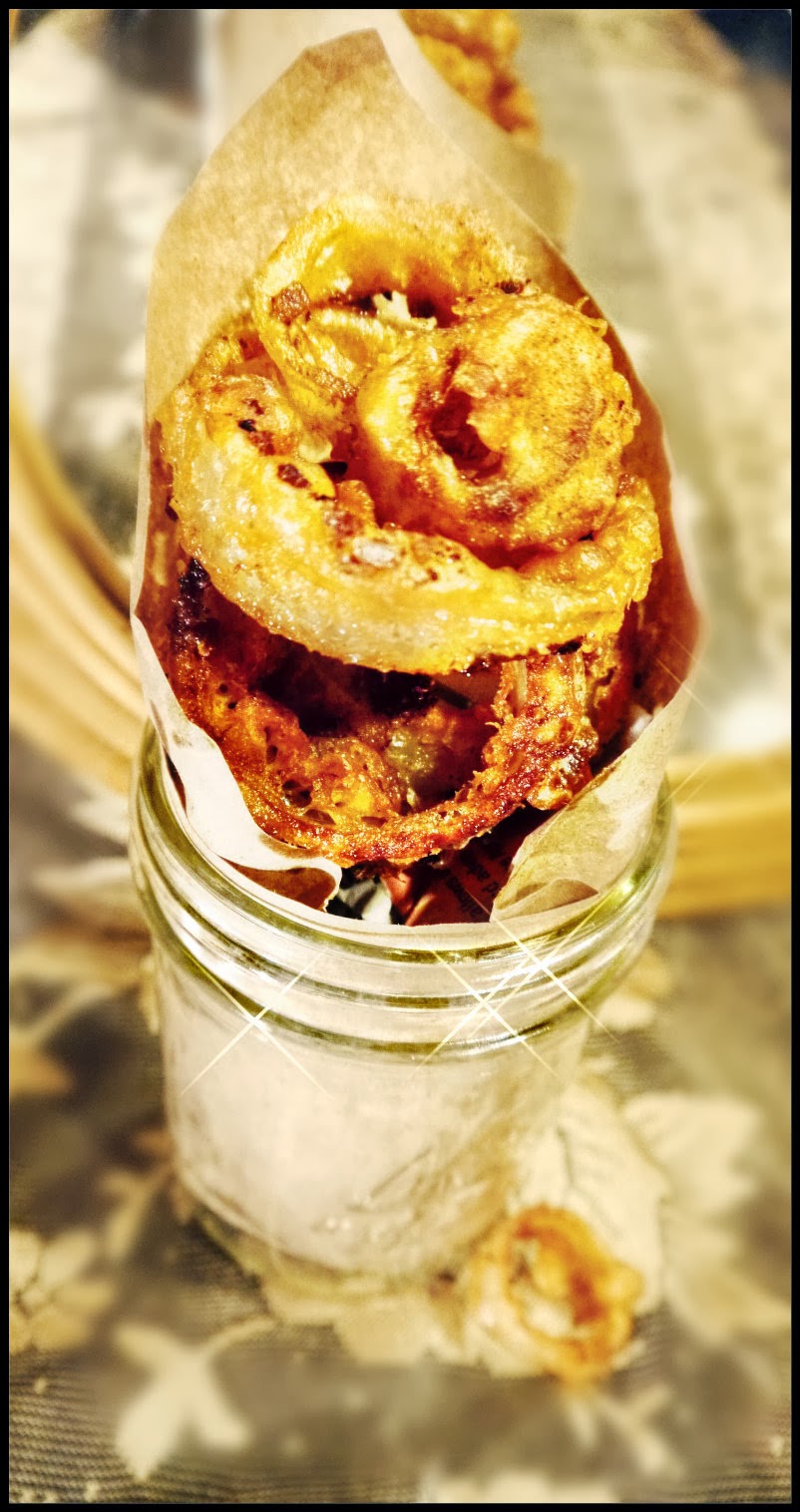 And the next night make sammiches with the leftovers!!! 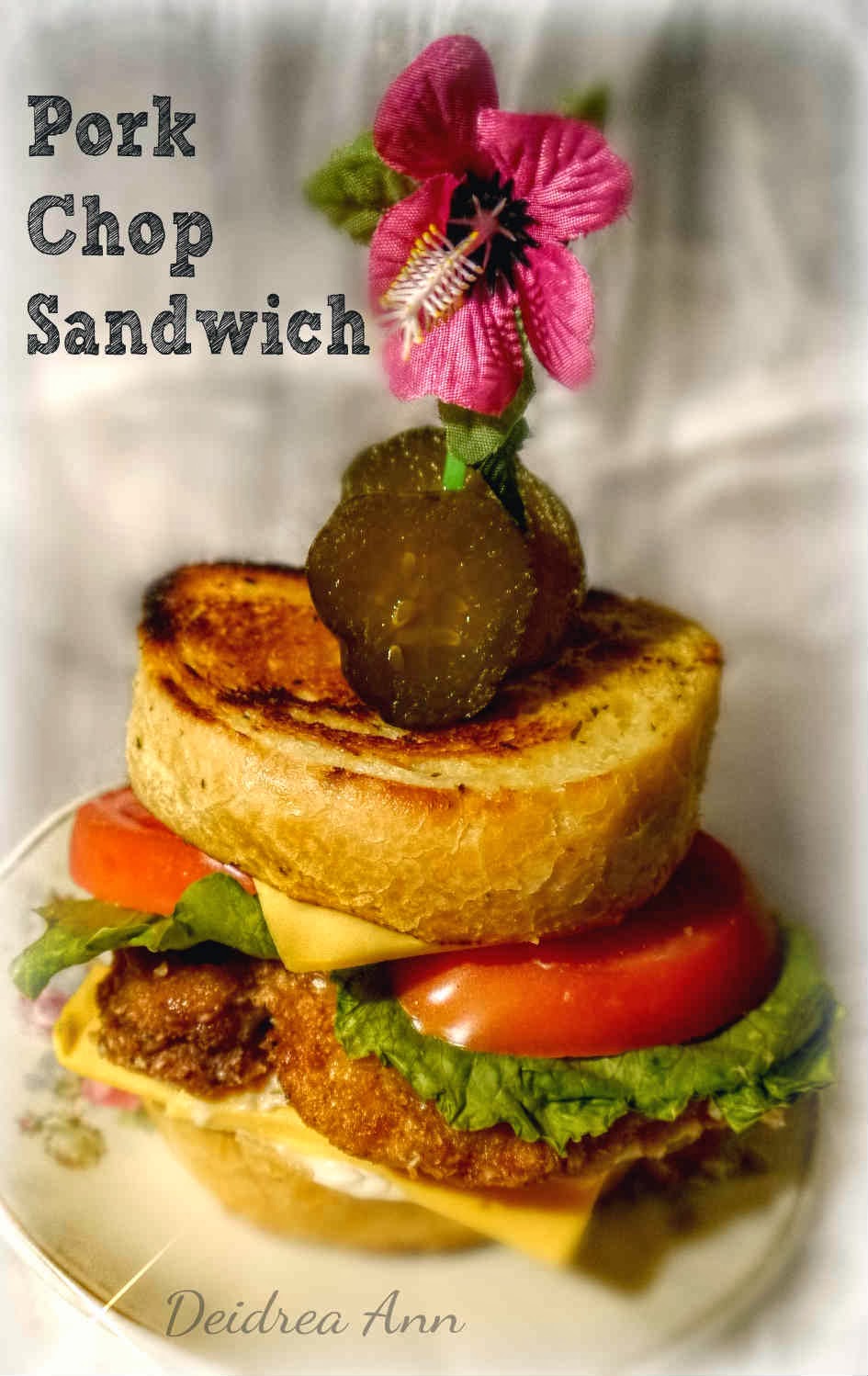 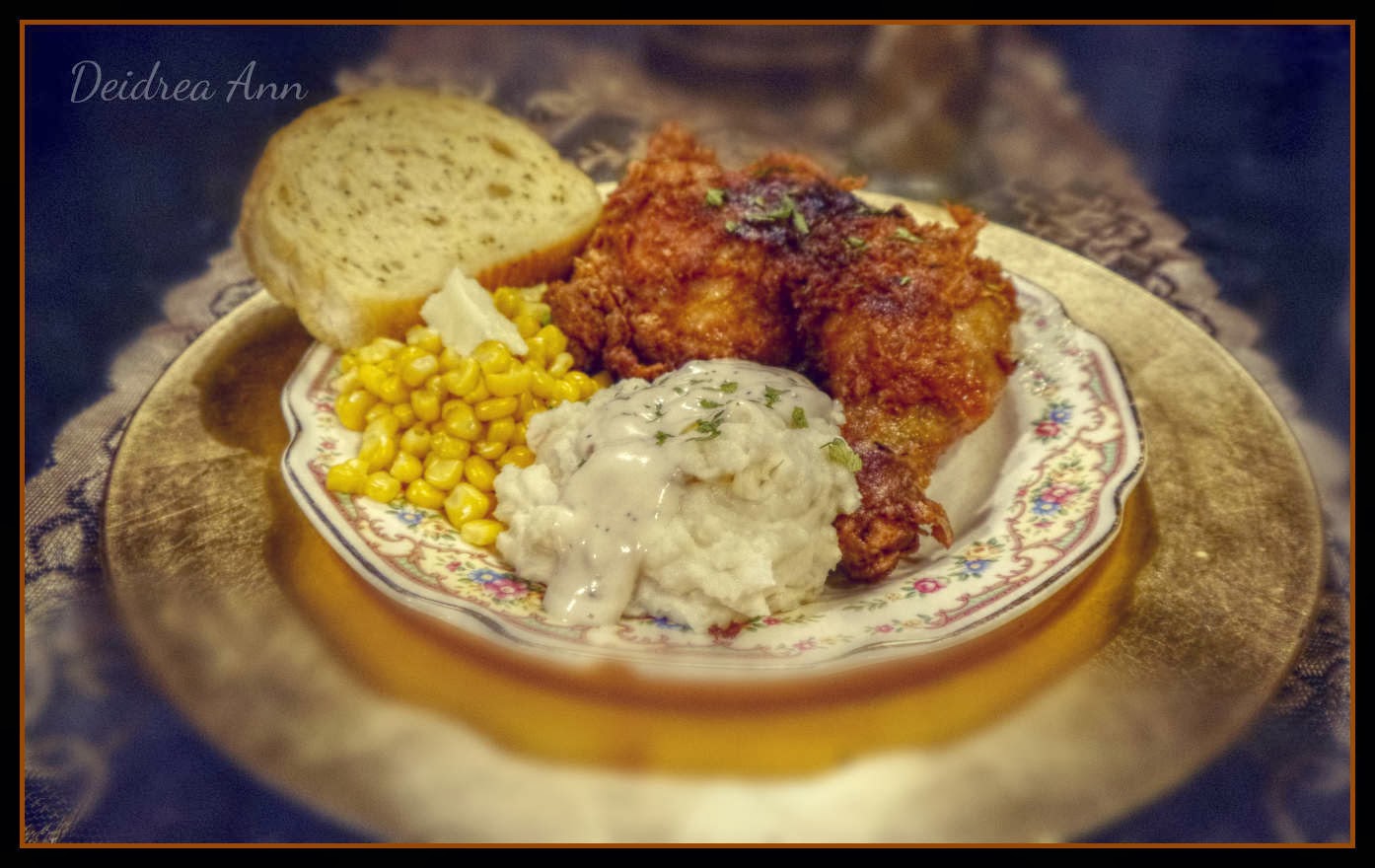 If you are planning ahead for this recipe, if you brine your chicken for 4 hours or more, this will be exceptionally delicious. 1 cup salt to 1 quart water, add chicken pieces, and let sit . Drain and start recipe.... 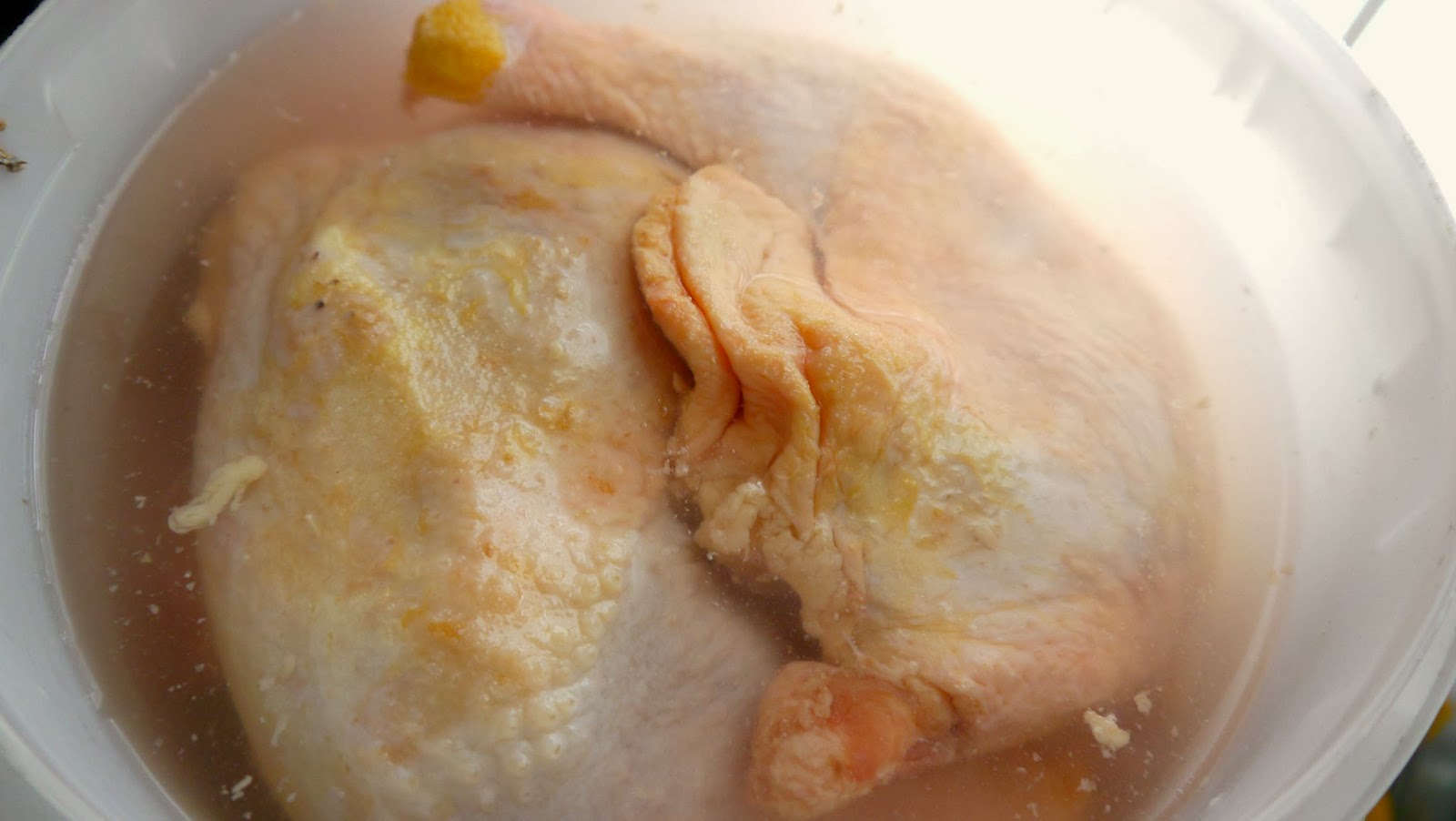 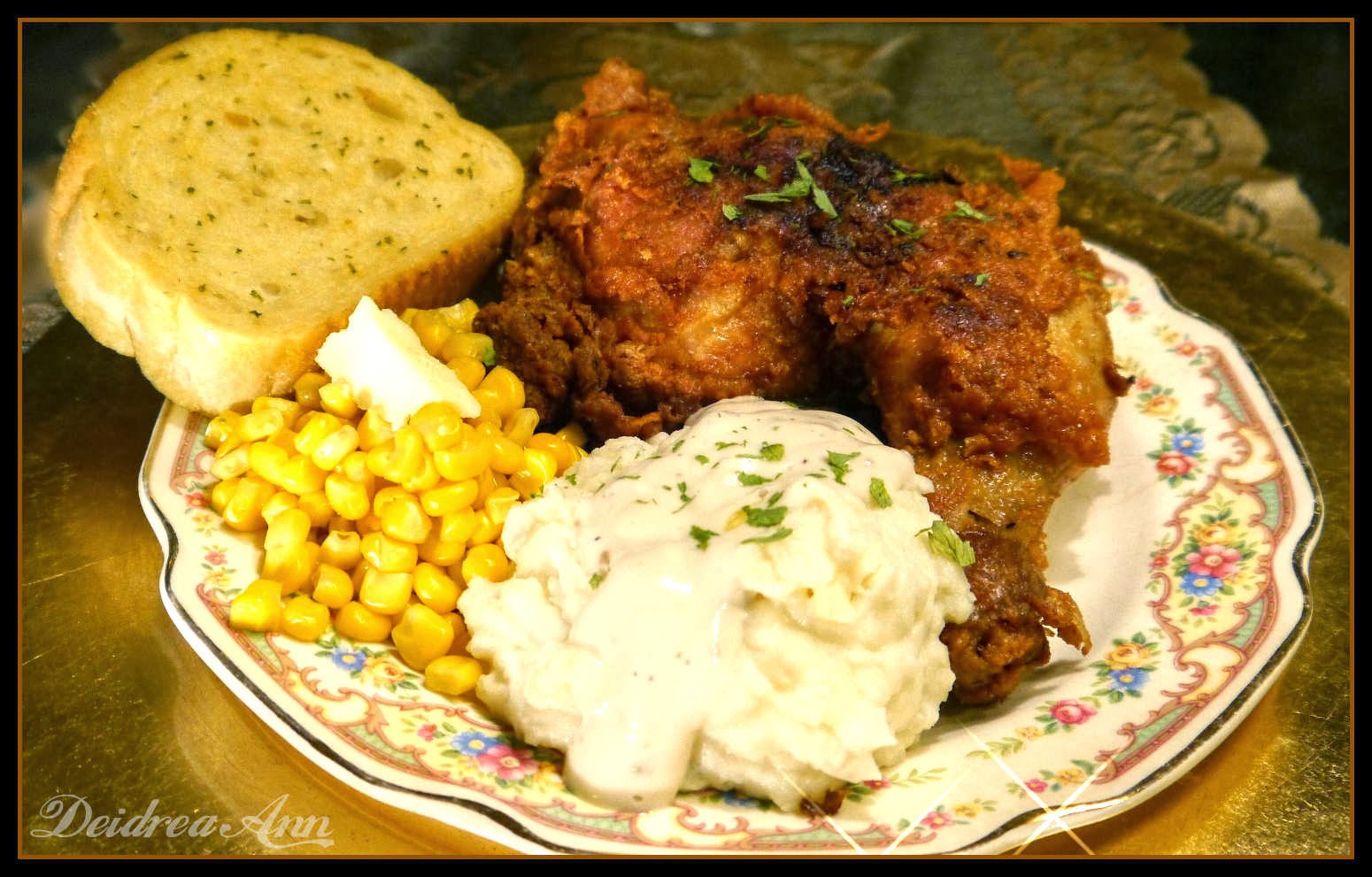 Ingredients
Melt enough shortening (over low heat) to come just 1/3-inch up the side of a 12-inch cast iron skillet, electric or heavy fry pan. Once shortening is melted raise heat to 325 degrees F. Do not allow oil to go over 325 degrees F.
Drain chicken and pat dry with paper towels. Combine salt,mayo, garlic powder, ranch, mustard, eggs and pepper in a large bowl.Mix well with a fork . Coat chicken with this mixture. Place flour in a paper shopping bag, add a couple pieces of chickenat a time into the bag and shake until coated with  flour and shake off excess.
Place chicken skin side down into the pan. Put thighs in the center, and breast and legs around the edge of the pan. The oil should come half way up the pan. Cook chicken until golden brown on each side, approximately 10 to 12 minutes per side. More importantly, the internal temperature should be right around 180 degrees. (Be careful to monitor shortening temperature every few minutes.)
Drain by setting chicken directly on your brown paper bag you used for flour . 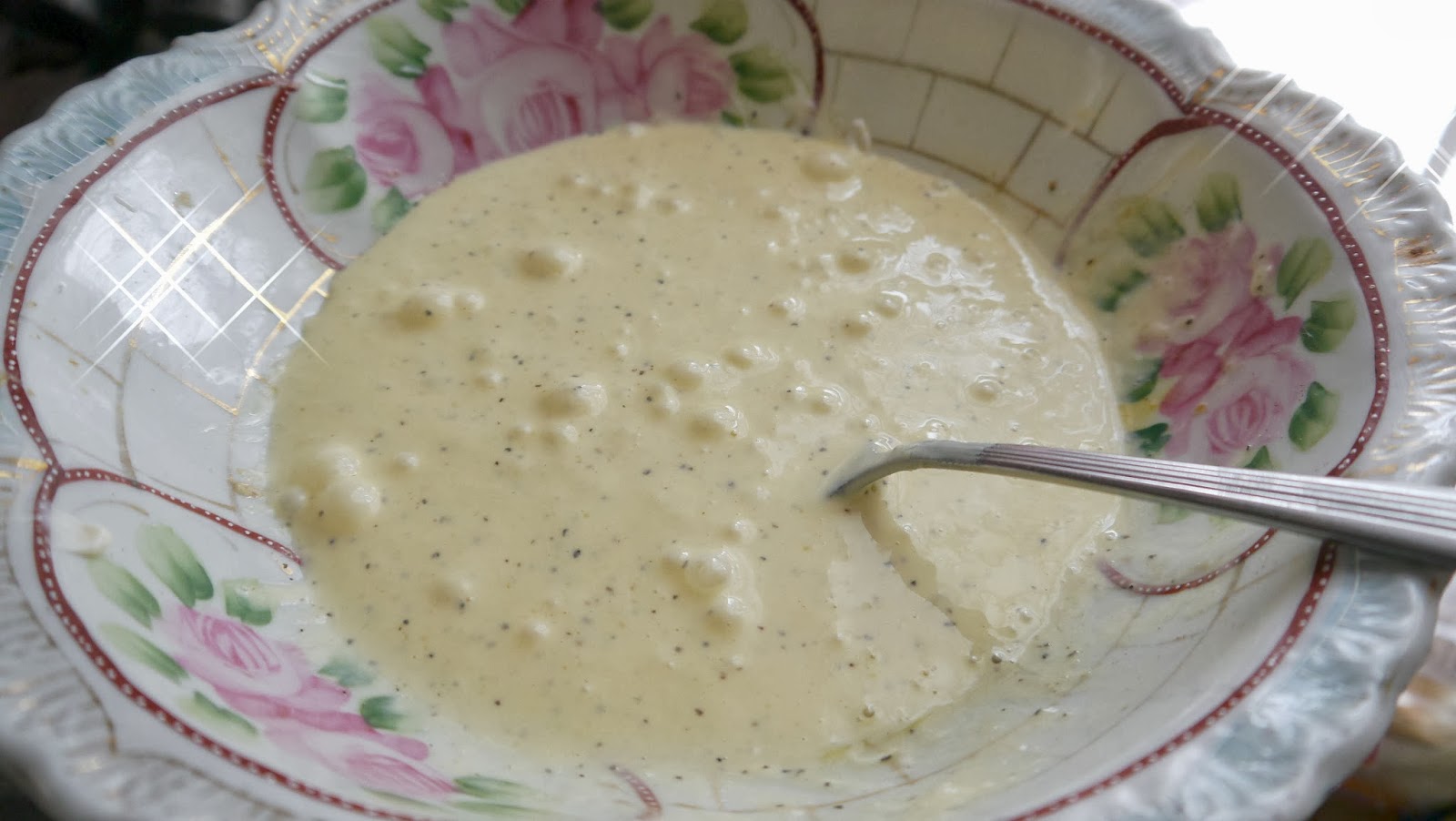 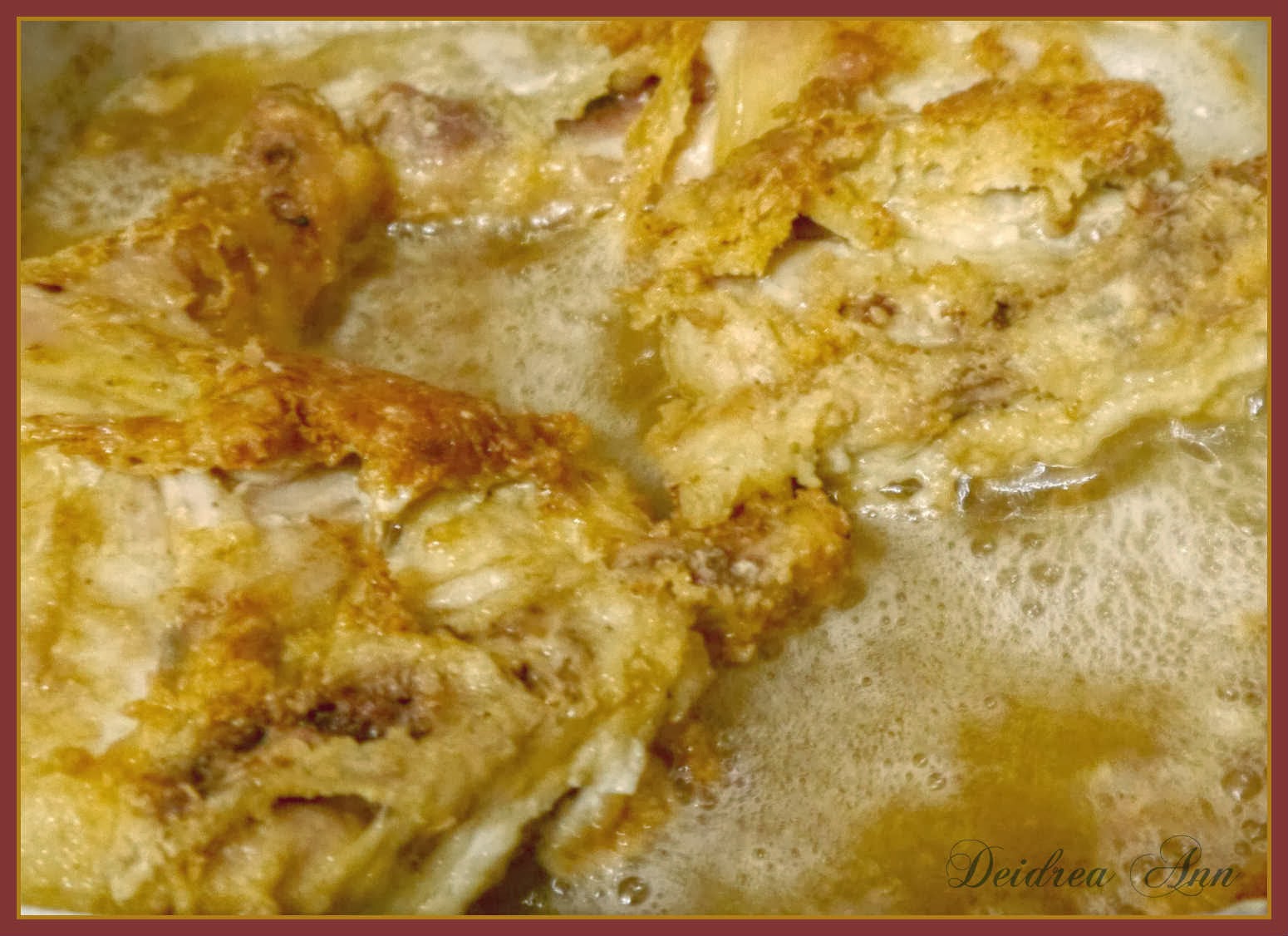 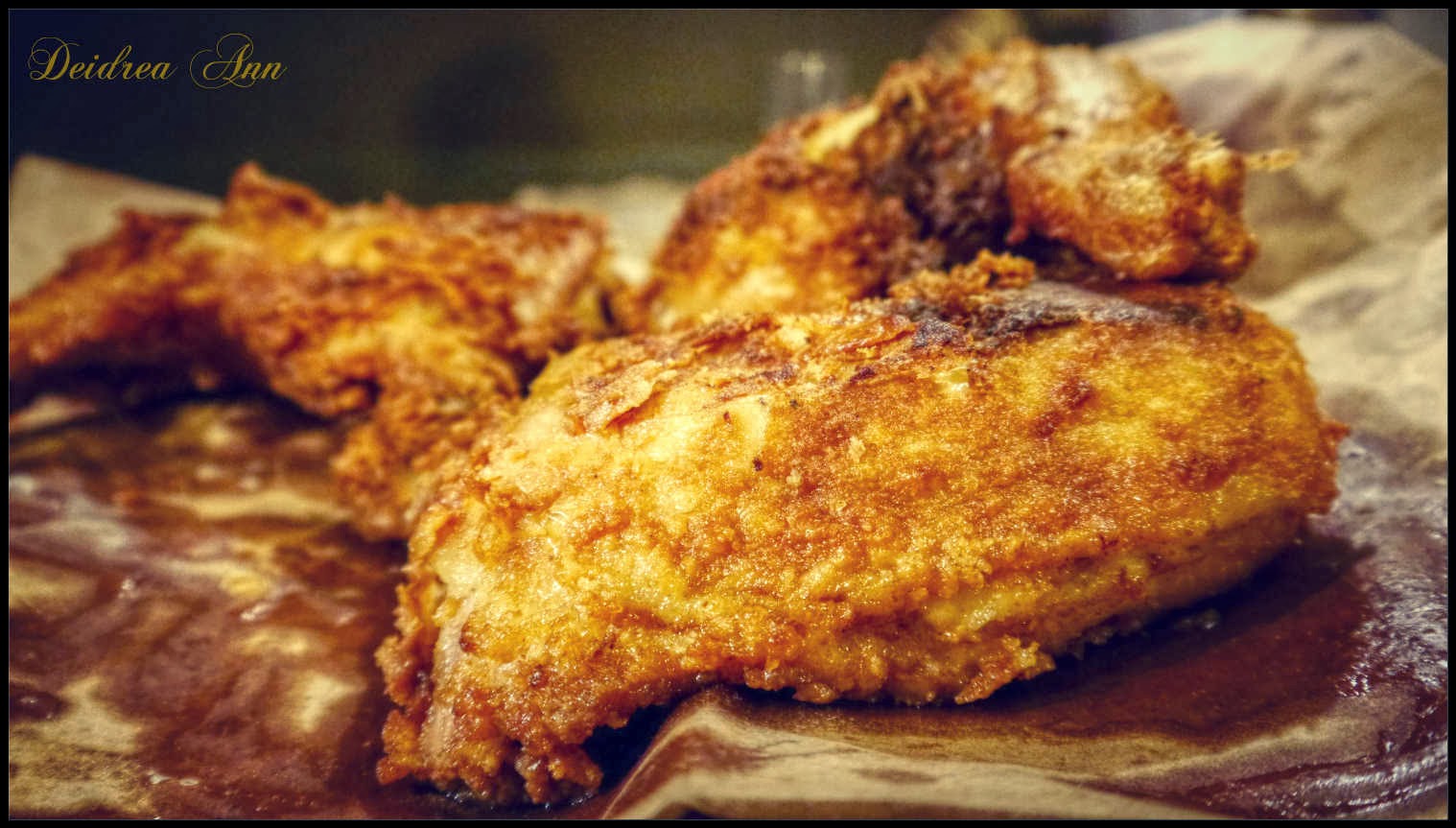 
A Dutch baby pancake, sometimes called a German pancake, a Bismarck, or a Dutch puff, is a sweet popover that is normally served for breakfast. It is derived from the German pfannkuchen. It is made with eggs, flour, sugar and milk, and usually seasoned with vanilla and cinnamon, although occasionally fruit or another flavoring is also added. It is baked in a cast iron or metal pan and falls soon after being removed from the oven. It is generally served with fresh squeezed lemon, butter, and powdered sugar, fruit toppings or syrup.

The Dutch Baby was originally served as three small Dutch babies served with powdered sugar and fresh squeezed lemon juice but eventually the "Big Dutch Baby" was invented and gained popularity. The Big Dutch Baby is usually what is referred to when reading about Dutch babies.

I like these sweet or savory. Fruit and whipped cream is the bomb, but if you slice some apples in the pan before adding the batter, that is awesome too. If I don't have any fruit, chocolate chips or a nice drizzle of hershey's syrup is awesome also. 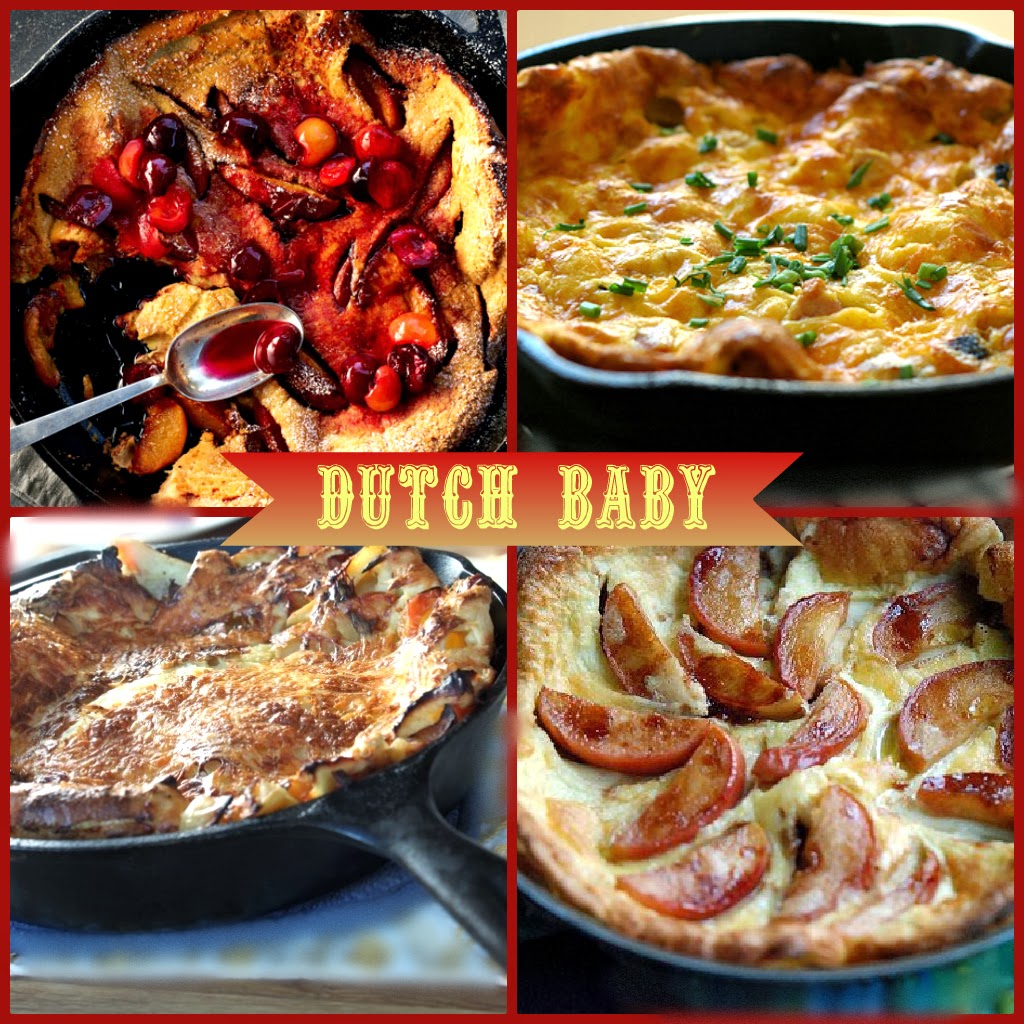 Preheat oven to 450. Put Cast iron skillet in oven while it preheats so skillet is very hot. Once oven and pan are up to temperature, add butter to pan to melt.

Mix ingredients in blender. Remove pan from oven, pour melted butter into batter, give a quick blend, then pour batter back into pan and place back in the oven. Cooking time is about 20-25 minutes or until top is golden brown .You can peek at it thru the oven window, but do not open cause you might make that po' baby collapse!
Tips:
Mix up the batter only right before baking.
Use room temp ingredients.
Hot oven, hot pan before starting. 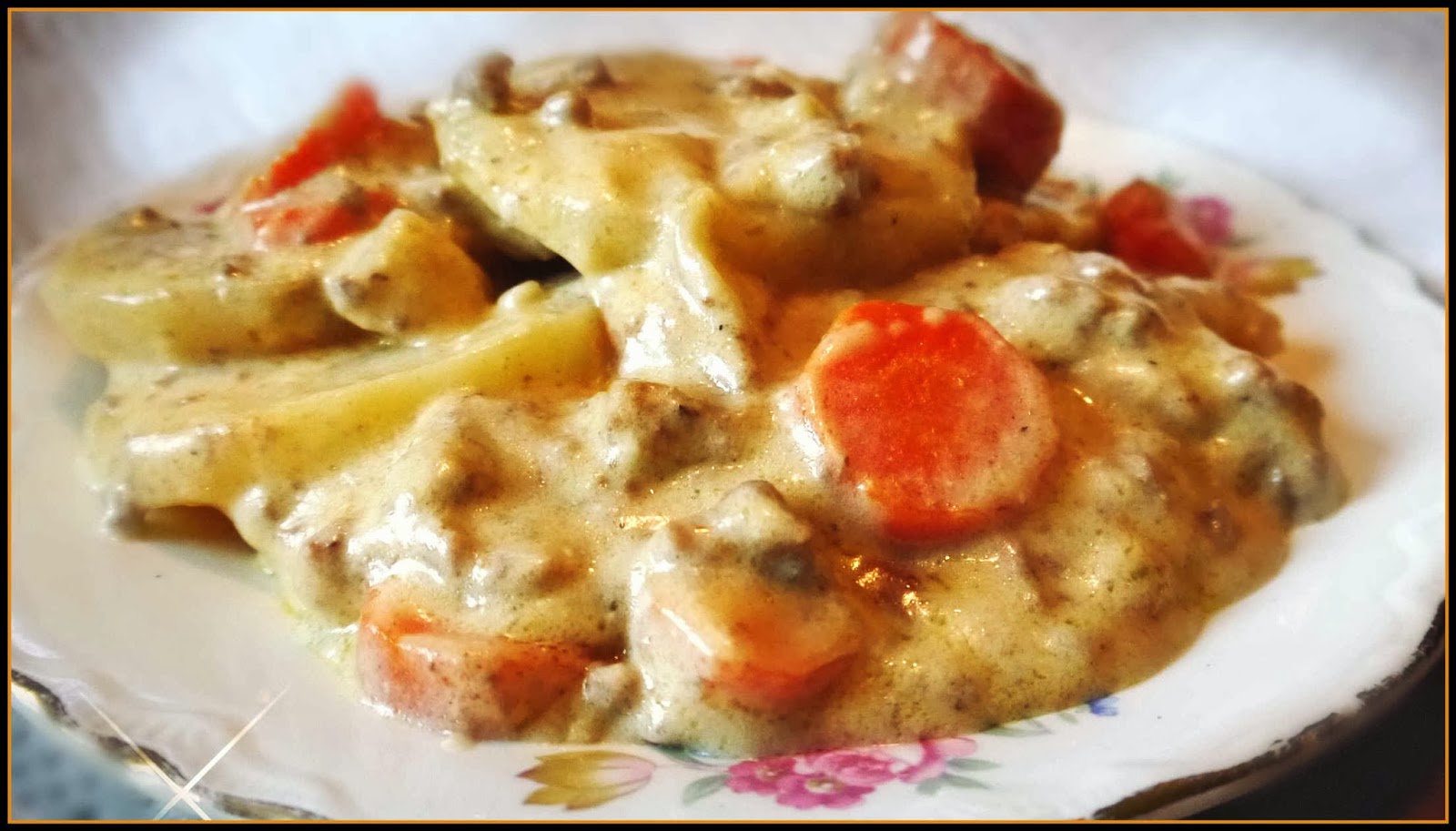 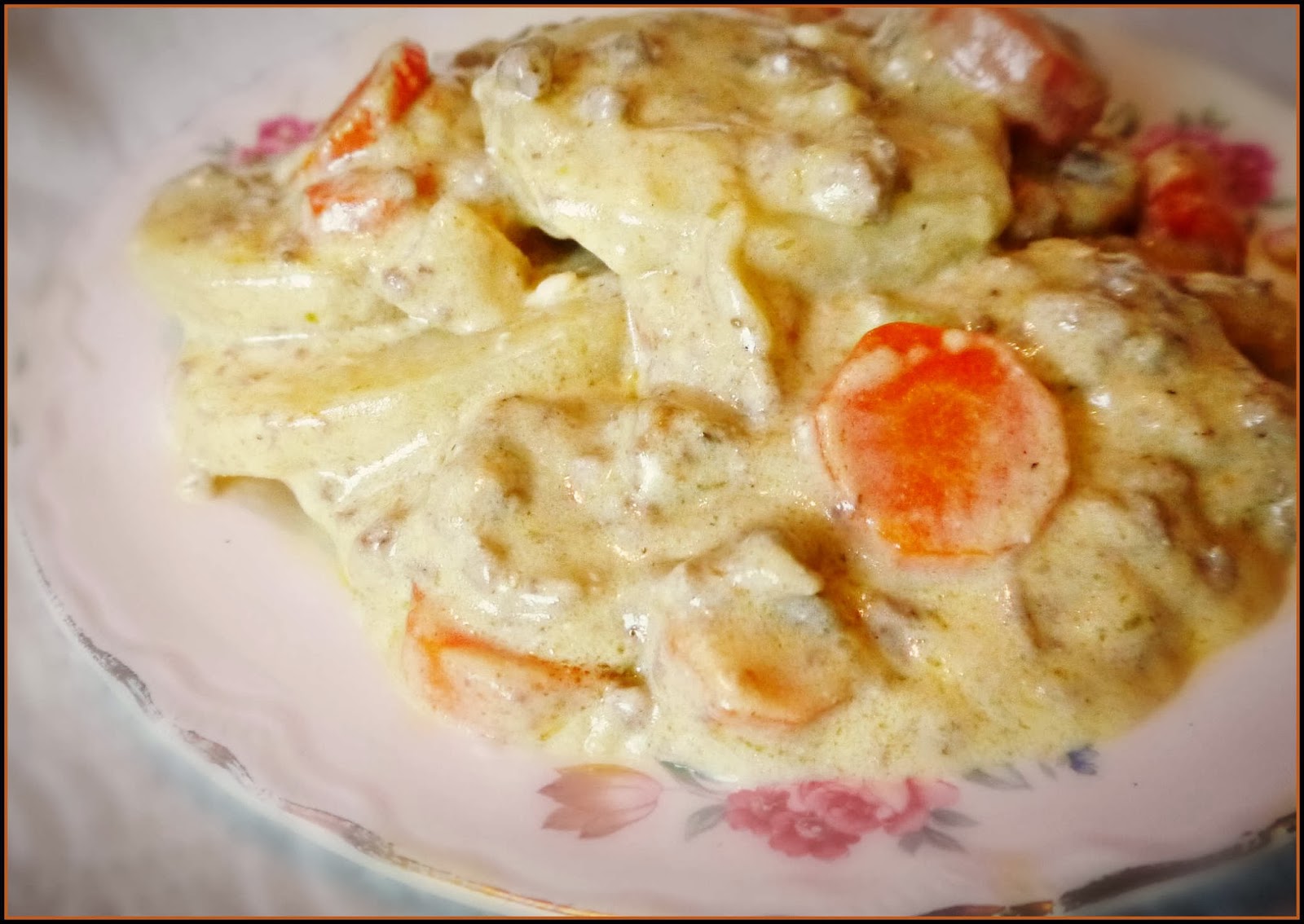 It is quite easy to dye feathers, you just have to use not-to-harsh chemicals so that you do not destroy the feathers.

Mix 2 teaspoons Rit Dye(or) Kool Aid, 1 teaspoon vinegar ,and  a pinch of salt in 3/4 cup of warm water. Make sure the container is not metal. I use a mason jar.

Add feathers and make sure they are covered in liquid.

Put the container in the microwave for 2 minutes. Stir, and repeat for 2 more minutes. Let sit or 10 minutes.